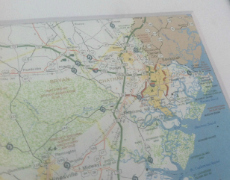 Recently, I’ve been inspired to gather photos and frames for a gallery wall envisioned for our dining area. I’ve been shopping around on Etsy and found a few photos of Savannah that I really, really, really like! I still plan on purchasing a few photos of Savannah – and Athens too, but I’m now thinking they’d be more suited in our living space. (Rabbit trail, whoops!) So, with the gallery wall in mind – I brainstormed a DIY project that told our (long-distance) love story. You know, the one where he lived here and I lived there and we were forced into a long distance relationship due to jobs and school. Yea, that one.

Honestly, I’m not sure where the idea initially came from – but, I may have been inspired by this or this or this. Either way, I’m claiming it as my brilliant idea.

What good is an idea if you don’t actually recreate it? None. So, I drove down to Albany’s Welcome Center to get a free, Georgia map. Then, I found time later last week to swing by Michael’s for a three photo frame. (If that’s even what you call it – you know, a frame that holds 3 photos.) It happened to be my lucky day, because not only was the frame on sale for 40% off – I had a 10% off coupon too!

Later that evening, while watching re-runs of Friends – I got out the map, a pair of scissors, & the frame.

Now I should preface, during a large portion of our relationship Justin and I lived in Athens and Savannah. (You’d know this if you read our love story.) Anyway, that left us 4 hours apart. During that time, we grew closer to each other – while becoming quite fond of both cities. Once we were engaged, where to live was one of the hardest decisions we had to make. Would it be Savannah? Or, Athens? No, no, Albany?

In the end, we settled in Albany… home. It’s where we first met, where we each grew up, and near to our families.

Should I even explain the significance and sentiment associated with both Athens and Savannah? We love them. Both cities hold a huge part of our heart and remind us so much of times throughout our relationship.

So, I took the scissors and cut 5×7 boxes around Albany, Athens, and Savannah. 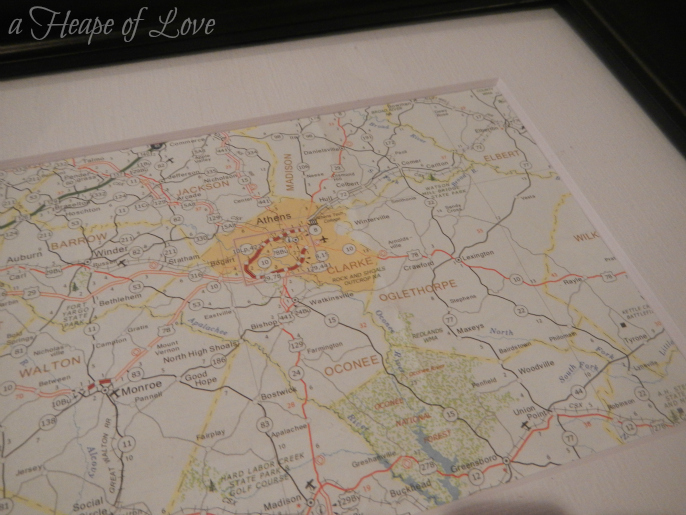 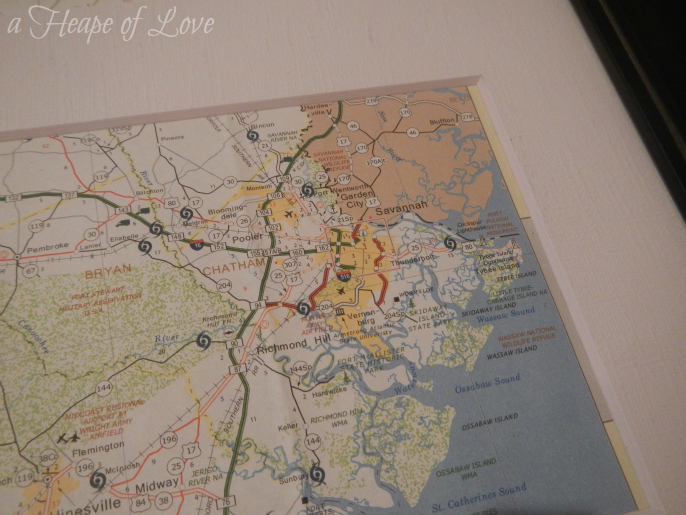 When we became engaged, Justin was living in Athens and I was living in Savannah, then we wound up in Albany – I thought it suiting to place Albany in the center. Kind of symbolic of us coming together and meeting in the middle. After framing each city, I sat back and admired my work. So creative, brilliant, and cheap. Proud doesn’t even come close to describing how I feel about my new, DIY home project. 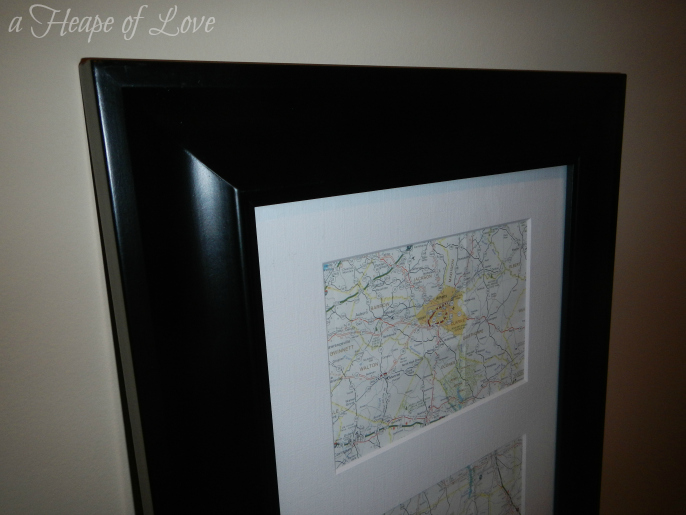 Whenever I completed it – I instantly thought of another couple whom may appreciate the art. Our dear friends, the soon-to-be Evans recently made some big moves in their relationship. Savannah is Sam’s home town and a city near to Julie’s heart. It’s the city the met each other and fell in love. (It’s also where we met these two!)

Right before becoming engaged… Sam accepted a job in Atlanta. So, they were left with the same question we were… where to live? Would they move to the big city of Atlanta? Would Sam move back to Savannah? Would they move near Julie’s family in Albany? (Okay, Albany wasn’t a right now question – it’s just a dream Sam has so that he can hunt in south Georgia!)

Either way, Julie was born and raised in Albany; Sam was born and raised in Savannah; together, their love took them to Atlanta. It was just as fitting for the Evans as it was for the Heapes. With a pair of scissors, another map of Georgia, and a new frame – I recreated a similar work of art. This time replacing Athens with Atlanta. 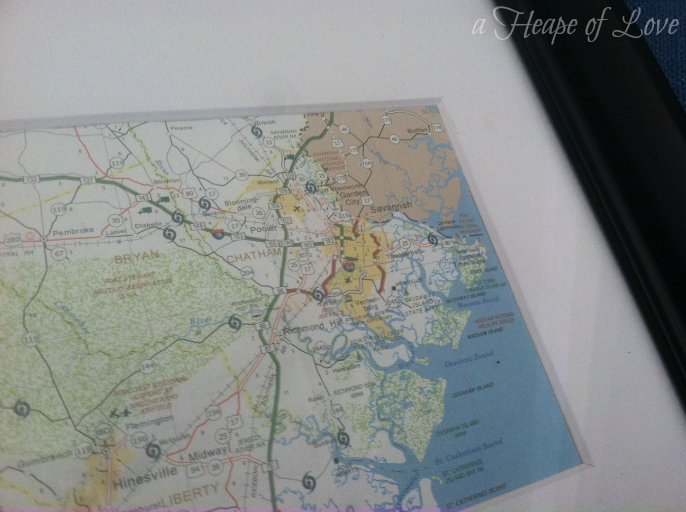 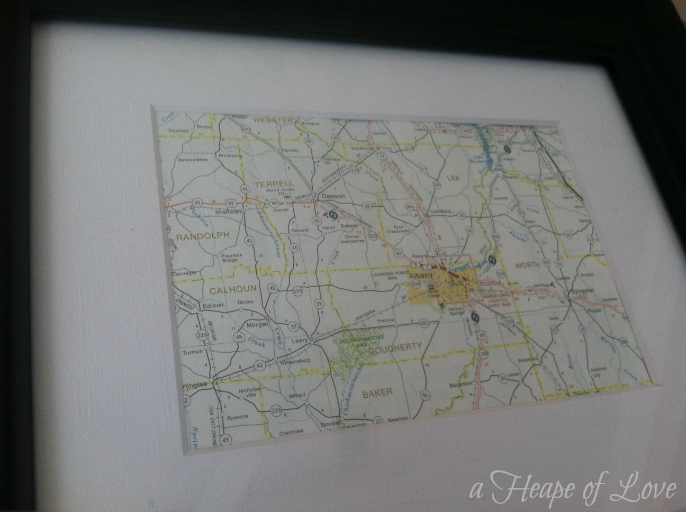 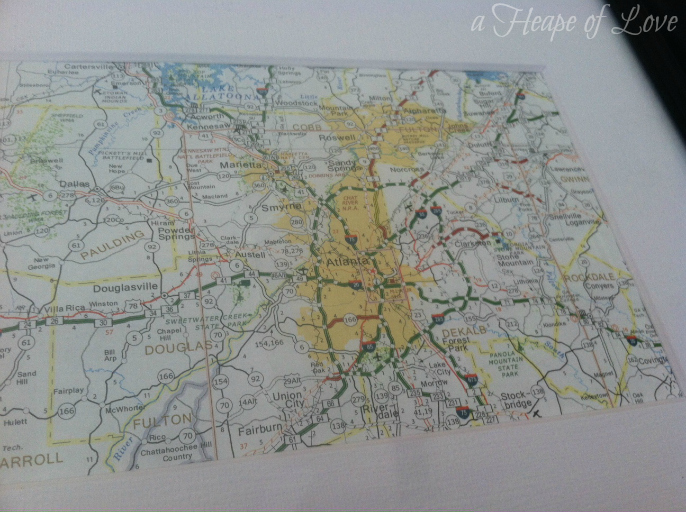 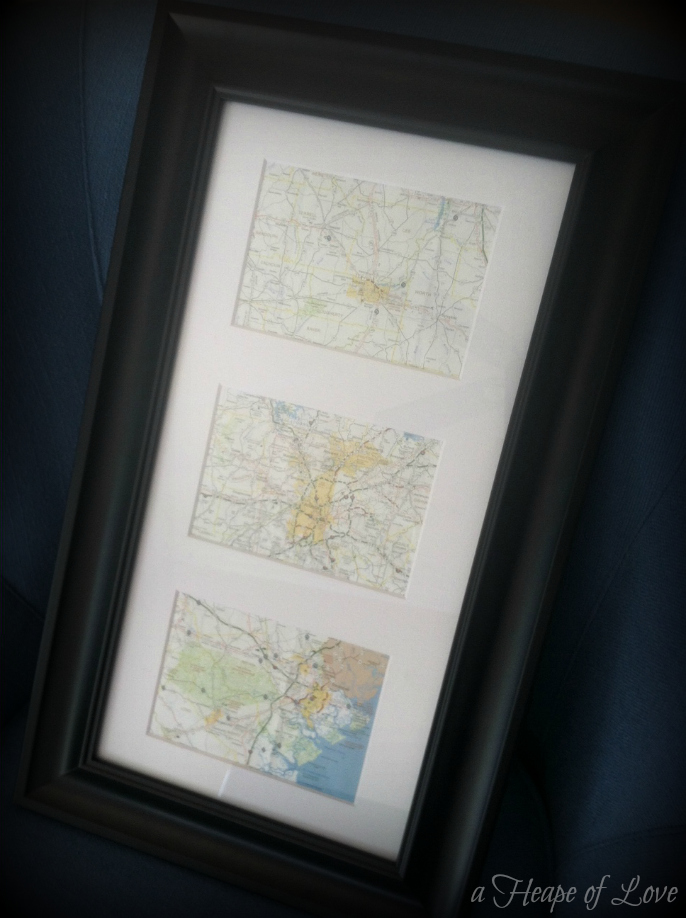 What do you think? Would you recreate something similar for your home?

Although for both DIY projects I used a frame to hold 3 images, you could really use anything – one, two, or more! It’s a great gift idea or something simple to make for your home. Not only did Julie and I really enjoy the map art, but both Sam and Justin love it too. Once it’s actually a part of our gallery wall, I’ll be sure to share!