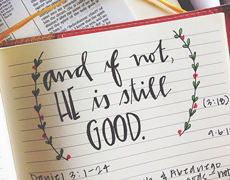 It’s rare that I find something so inspirational and motivational that it lingers in my mind for days, much less weeks. Three weeks ago (according to Pinterest), I stumbled upon an image of this phrase, “and if not, He is still good.” I don’t know why, but it hit me square between the eyes and found it’s way into my heart. It was such a reality check for me, a wake-up call, a sort of lightbulb. At the same time, it was so, so very comforting. 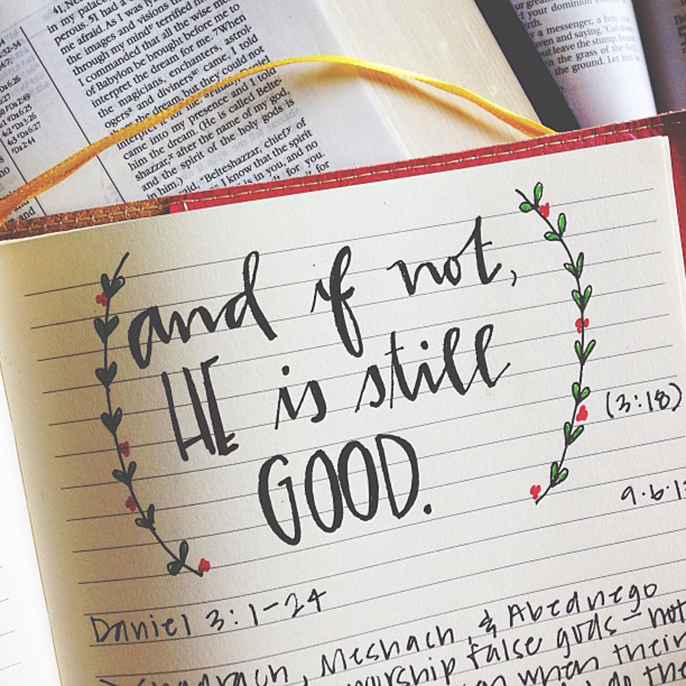 It’s as if this world has presented a timeline and I want to follow it, rather than trust Him. Countless times, this has been a stumbling block for me. I won’t name them all, but one experience stands out above the rest and I feel it’s time I share it.

As many of you know, Justin and I dated for years. For those of you that know us well, you know that we referenced our relationship as a “friendship” for most of those dating years and it was during those friendship years that this realization mentioned above first made it to my heart. I knew pretty early on that Justin was the man for me, but to say he had that same conclusion early on would be an out-and-out lie. It was years before Justin made this realization and I had to wait it out.

I remember as if it were yesterday, the day it all went down. I was living in Savannah and Justin in Athens. We’d come home to visit family and met in Macon to journey the last leg of the trip together. My family (specifically my Daddy) had been putting the pressure on Justin to make a full-fledged commitment. No more friendship bogus, he wanted to know if Justin was pursuing my heart for marriage. (I should preface that we’d been together for years at this point.) The answer Justin gave me wasn’t what I’d hoped to hear. After years together, he wasn’t sure where he wanted the relationship to go. However, he still wanted to see me. To say I was heartbroken would be an understatement.

The ride back to Macon was torture. We didn’t say much to each other. I cried, a lot. About 15 minutes outside of Macon, I said something along the lines of if he wasn’t ready to pursue me with the intent to marry me, I didn’t want to keep trying or seeing each other. Awkwardly enough, he kissed me bye, hugged me, and said he wanted to come visit in a few weeks. Talk about confusing me and my emotions! Through tears I told him no. I said I didn’t want him coming to visit and that things weren’t going to be the same going forward. It was so hard.

I remember getting in my car to drive back to Savannah and calling my Daddy in tears. I remember saying I really thought he was the one, Daddy. Somewhere between I-16’s Exit 6 and Exit 165, I found peace that even though I’d thought Justin was the plan the Lord had for me, that “if not, He is still good.” I realized that even if things didn’t go according to my plan, He is still Good! At the end of the day, if what I’d thought to be true wasn’t how He’d intended… He would still be Good!

The next 24 hours sucked, plain and simple. But in the light of the morning, He was still Good!

As the story goes, Justin came quickly (as in those same 24 hours) to the realization that he 100% did want to pursue me to be his wife. And 1 year later, we’d be engaged. And here we are 1 1/2 years into our marriage. It’s funny how the Lord works, right? It’s funny to look back into the past and see how strategically He works. Everything, no matter how minuscule, is all for a purpose. It’s amazing, really.

Recounting the details and remembering the pain I felt that day no longer hurts. Because in the end, I trusted the Lord with my heart and He is and will always be Good! So now that memory serves as a reminder, whenever I want or hope for something, that if not He is still Good!

I needed that today. And someone (maybe you?) needed that too. So, what is that thing in your life? That event or moment that if not, He is still Good?