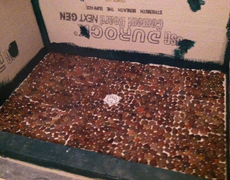 If you’ve seen me in the last few weeks or so, there is a great chance I’ve been whining about the progress of our master bathroom – for good reason, of course! I should preface that this was the first project we began, the most complex project we’ve taken on, and the slowest process to date.

Since the day Justin’s parents moved into their house, I’ve dreamed of one day having a similar shower to theirs. So when we first bought our house, I loved the idea of ripping out the master bathroom’s ceramic tub/shower combo and replacing it with a custom, tile shower. Somewhere between the dreaming and the demolition of the tub, wall, and plumbing, I became overwhelmed with anxiety of this project ever being completed.

Let me start from the beginning. First, the guys (my husband and father-in-law) got a little demolition happy and put a sledge hammer through the shower walls! Second, they used that same sledge hammer to knock out half of a wall – a wall that just so happened to house the major plumbing and shower head. That’s probably around the point that I began to freak out – just a wee-bit. Then when I accepted the reality that we could no longer use our $10, Target shower curtain and would have to install a beautiful, yet expensive glass wall and door… we faced the question of where would the shower head go – you know, since the wall that the shower head and plumbing was on was now GONE. After much consideration and shopping around, we decided on a rain head that would actually come from the ceiling (upgrade!) – and the problem was solved. 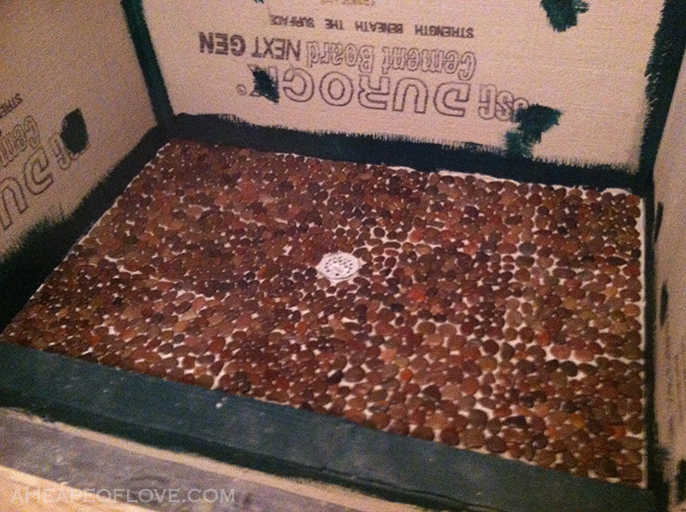 Then, last Thursday night – Justin and his Dad knocked out the flooring in the bathroom. Literally, knocked it out of the park! Not only does it look awesome, but it only took them about a hour and a half (not counting prep time). Whoohoo! 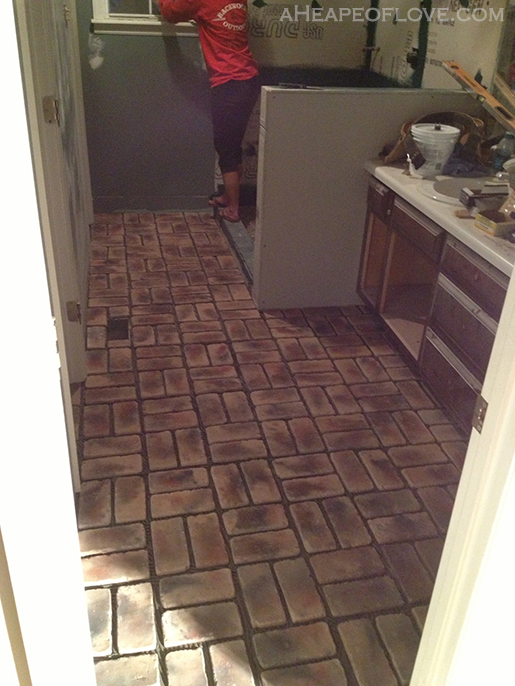 (Please ignore the bootie in the background, that blue paint, and the mess on the counter.)

Although the master bathroom is still very far from completion, the progress is moving and I’m very excited about seeing this project come together!

After that, we’ll grout the river rocks and brick pavers. Then, we’ll tile the shower, paint the walls, and install the sinks and countertops. Not too bad, right?

Even though progress is moving – we still need lots of prayer to have it all completed by move-in day! Prayers for patience, our knees and backs, and time to standstill while the progress continues.

In other news, I’m leaving for a girls weekend at the beach with a few of my favorite ladies this week! As bad as the timing is (with all of these renovations!), I can’t wait to spend 3 days on the beach with friends. We’re leaving on Thursday evening and I can’t wait!

What are you looking forward to this week?